Large discrepancy of aerodynamic loads between OpenFAST and Simpack

1. Structural property
I have checked structural property (mass, inertia, bending stiffness) is identically used between Simpack and OpenFAST.
To double check these two software simulate the same wind turbine, I conducted a free decay test (without any other environmental loads) by assigning an initial tower top displacement of 1 meter in x axis. And then I compared the displacement of tower top in x and y axis simultaneously. The tower top displacement curve can match well initially (with the same 1% critical damping for both blade and tower) :

With time going on, there is a deviation for both x and y axis. I guess it results from the torsion effect. Elastodyn has no torsion mode, while Simpack explicitly model tower as euler-bernoulli beam so that torsion effect is accounted for.
But I am inclined to come into the conclusion that I have used the same structural property between Simpack and OpenFAST as the initial free decay response is similar.

2. Aerodyn
Then I turn to apply wind.
I simplified the wind to steady and uniform wind, with inflow veloctity = 11 m/s.

I have checked that Simpack used the same airfoil files and Aerodyn15 file with OpenFAST. Although BEMT and steady AFAeroMod seem to be unsuitable for rotating rotor, I just keep the same aerodyn15 configurations between Simpack and OpenFAST to hope to get the same rotor loads.

4. Servodyn:
#1. Servodyn is turned off. So no control is adopted in OpenFAST and Simpack. That said, rotor will rotate freely.

#2 Simpack and OpenFAST use the same bladed style DLL for PCMode and VSControl compiled by Dr. Jason.
Then I Compared the rotor load (RtAeroFxg), rotor speed and calculated the tip speed ratio (TSR):

The rotor speed and TSR of Simpack and OpenFAST can match. But I can not understand why the rotor load is so different.
#2 with control (same DLL):

Now with control, rotor load and rotor speed seem to be identical while there is still a deviation for steady value of rotor load.

Here is my question:

As you noted in (3), I’m guessing the main reason for the differences between SIMPACK and OpenFAST with aerodynamics enabled is the inclusion of blade torsion in the SIMPACK model. The OpenFAST model can also include torsion in the blade by enabling BeamDyn (the NREL 5-MW wind turbine model with BeamDyn enabled is available here: r-test/glue-codes/openfast/5MW_Land_BD_DLL_WTurb at main · OpenFAST/r-test · GitHub). Does switching from modeling the structural dynamics of the blade from ElastoDyn to BeamDyn reduce the discrepancies between SIMPACK and OpenFAST for your two cases with aerodynamics?

Thanks for your advice, @Jason.Jonkman .
I am trying to use Beamdyn. But when I check the input file of Beamdyn, it needs stiffness matrix and mass matrix for several cross-section, right?

Rather than using Beamdyn in OpenFAST, I depressed the blade torsion in Simpack. Then I conducted #1 (the case without control) as mentioned above. Now these two rotor loads can match well: 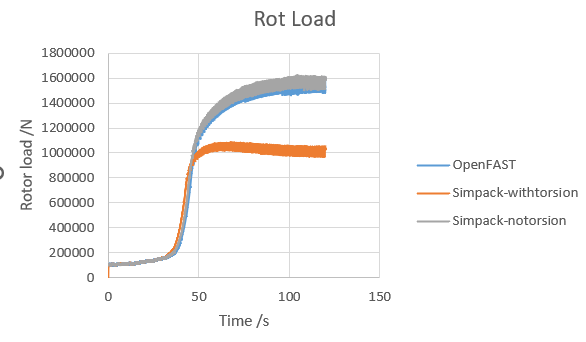 Now, I think I can conclude that the discrepancy indeed results from blade twist. To further validate my guess, I will try to use Beamdyn to account for blade twist in OpenFAST.

Yes, the shear stiffness values in the BeamDyn model of the NREL 5-MW baseline wind turbine are defined artificially and the solution should be insensitive to these values.